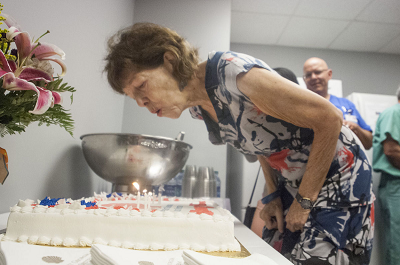 The 72-year-old St. Simons Island woman felt ill that weekend in January and finally called friends to take her to the hospital.  “I was feeling weak,” she said recently. “I thought it was the flu.”  Her friends came to her house, used a rolling office chair to shuttle her to a waiting car and later boarded her dog, Bentley. When she arrived at Southeast Georgia Health System’s emergency care center, Zwenig wasn’t looking so good, nurses and doctors said Tuesday.  “She was very pale,” said Dr. Mohsen Akhlaghi, an emergency doctor who treated Zwenig. “She was clearly losing blood.”  A CT scan would eventually show Zwenig did not, in fact, have the flu. She had a much more serious problem: an abdominal aortic aneurism.  “In some cases, there is no chance of survival,” Akhlaghi said. “It’s like the main blood pipe, and this is a tear in it.”  Zwenig was bleeding to death on the inside, and she didn’t even know it. Abdominal aortic aneurysms — doctors call them “triple As” for short — generally affect men over the age of 60. Smoking increases the risk, and the condition can be chronic.  “They asked me if I had ever had kidney dialysis,” Zwenig said. “I said, ‘kidney dialysis? I’m a healthy person, I’ve never had kidney dialysis in my life.’”  But blood work and scans showed her kidneys were starting to fail. Akhlaghi, the emergency doctor who wasn’t even on duty, but was pulled from a meeting to tend to Zwenig, knew the situation was serious.  “That day, I was not supposed to be working. But things happen for a reason. I saw one patient that day, and it was you,” the doctor said to Zwenig on Tuesday.  Southeast Georgia Health System has a vascular surgeon who could have treated Zwenig, but he was off-duty that day. So, Akhlagi arranged for a helicopter to take Zwenig to a level-one trauma center in Savannah. When she left for Savannah, Zwenig had a “98 percent chance of dying,” she said.

Zwenig, though, laughed when she remembered the story. She recollected it Tuesday in a professional lounge down the hall from the hospital’s emergency room. A cadre of emergency health care workers gathered there for a celebration — complete with cake — for Zwenig’s birthday.  “I always wanted to see the Georgia coast from a helicopter,” she told nurses and doctors. “But I was laying flat on my back in the helicopter, so I couldn’t see anything. I guess I can still check that box, though.”

After several days of hospitalization, Zwenig was released, but she wasn’t done with Southeast Georgia Health System. Her near-death experience and the quick thinking of emergency doctors and nurses still necessitated one thing: a thank you.  She went to Paul White, President of the Communities of Coastal Georgia Foundation, where she has a charitable-giving fund, and told him to give several thousand dollars from her donor-advised fund to the hospital. The money is being used to refurbish the professional lounge, add new furniture, a TV and other amenities for emergency room workers to escape the chaos and cool down.  “It’s going to be very nice,” Akhlagi said of the renovated lounge. “We’ll definitely be watching some college football.”  For Zwenig, she felt the donation was the least she could do.  “Without you all, I would not be able to celebrate my birthday today,” she said Tuesday. “I felt like I needed to do something to show my appreciation for the (emergency room) staff. If you don’t feel appreciated, know that you should.”