For Paul White, outgoing director of the Communities of Coastal Georgia Foundation, the foundation’s goal is simple to summarize, if infinitely more complex in practice.

Through a variety of mechanisms – endowments, scholarships, grants and more – the foundation helps people who want to use their wealth to benefit their communities and distribute it to nonprofits and organizations that will make sure it does the most good. It gets them the most bang for their buck, so to speak.

One of the most popular methods by far is the donor-advised fund, in which the donor trusts the foundation to manage the fund but retains some input into how the money they donated gets distributed. One example is the fund established earlier this year by a $1 million donation from Patrick Parker of Parker’s Convenience Stores.

In 2022, the foundation awarded over $170,000 in grants to 24 organizations in Glynn, Camden and McIntosh counties as part of its annual Community Impact Grant program. The foundation only budgets $75,000 a year for grants, meaning some don’t get a cut of that. But White said the people in charge of donor-advised funds are routinely amenable to putting up some of their money to bridge the gap, and for the last several years, White said no deserving organizations who met all the foundation’s requirements have had to be denied a grant.

That’s one of the many things he has cultivated during his six-year tenure, he said, but when asked he preferred not to take much of the credit. Also under his leadership, the money the foundation has managed has grown from $16 million when White took over in 2016 to $50 million and the staff has doubled.

“I think the reason we’ve grown is because of the work of all my predecessors,” he said.

He’s simply following in the path of those who established the foundation’s strong internal structure and sound, grounded management practices, he said.

Instead of asking for money, White says the foundation’s work speaks for itself. Any growth is not due to solicitation but simply due to people hearing about their work.

The foundation has always been involved in other community efforts, and under White it expanded into seminars on rising sea levels, spreading the word about the untapped potential in downtown Brunswick and training clergy to understand racial equity. That last one made a big difference in the community before, during and after the convictions of Ahmaud Arbery’s murderers last year.

He doesn’t feel like the foundation takes sides, but instead like it is a neutral party in local affairs that simply aims to make South Coastal Georgia a better place.

Easily the hardest part about leaving, however, is the team he’s built there, White said. He hates to leave but feels like where he’s going is too good of an opportunity to pass up.

White headhunted to be the first director of the Floyd-Polk Health Care Foundation in Rome, Ga., created from the proceeds of the sale of the Floyd Medical Center to Atrium Health, he said.

In this case, however, it’s a private foundation, meaning he’ll be only concerned with the grant-writing side of things and not the fund development side. He finds making and issuing grants to actually be the harder of the two but doesn’t have a preference for either one himself. 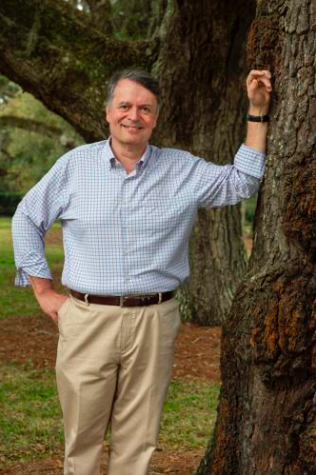