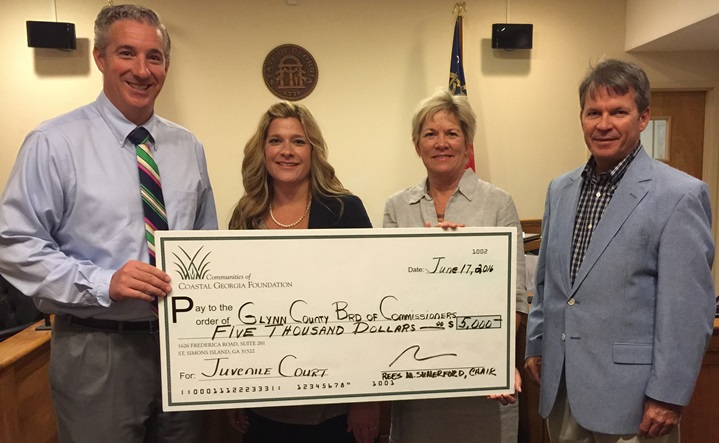 The Communities of Coastal Georgia Foundation recently awarded a $5,000 Community Impact Grant to the Glynn County Board of Commissioners for Glynn County Juvenile Court. The award will allow the KidsNet Glynn program to serve more participants. The diversion program provides behavior management, family advocacy and parent education to youth and families involved with the juvenile court, with the goal of reducing commitments and recidivism. 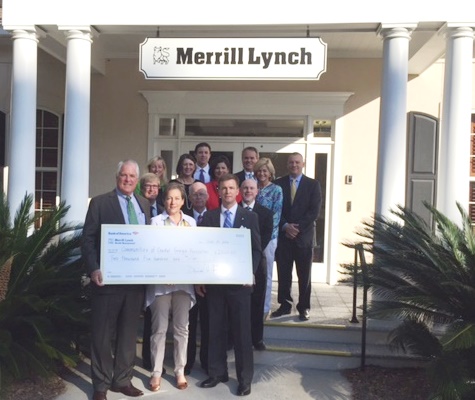 Local branches of Bank of America and Merrill Lynch recently awarded the Communities of Coastal Georgia Foundation with a generous donation to support the Foundation’s mission of providing community education and policy engagement for professional advisors and estate planners. 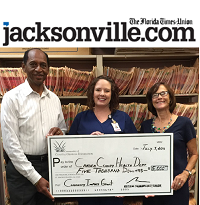 A Foundation has given the Camden County Health Department a $5,000 grant to begin an advanced vision screening program to ensure children can see well enough to read. 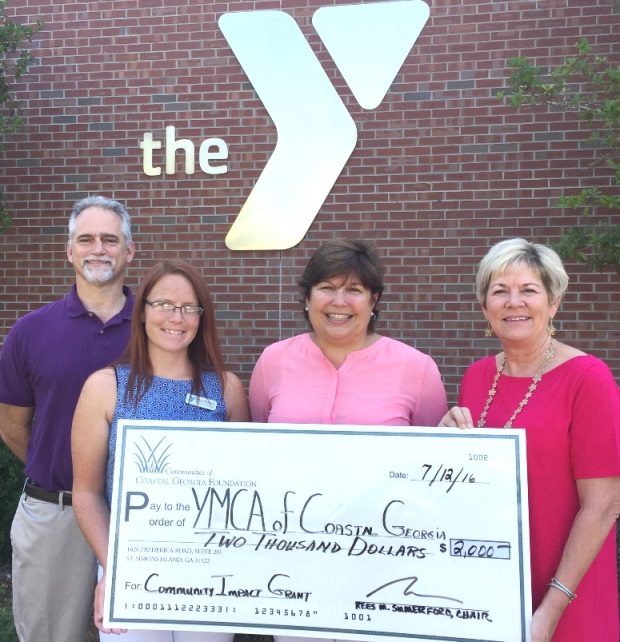 Foundation Board Members have been busy!  As a result of the 2016 Competitive Grants Process, 16 worthy organizations are being awarded grants.  Here are some of them....

The Brunswick News - by Anna Hall

Throughout the course of 2015, more than $2.1 million was raised by the Communities in Coastal Georgia Foundation to support an array of diverse nonprofit organizations along the Georgia coast. 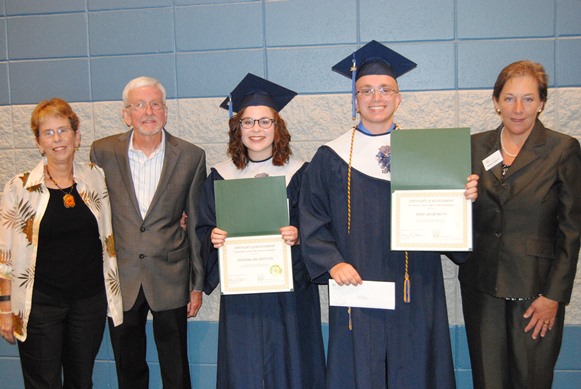 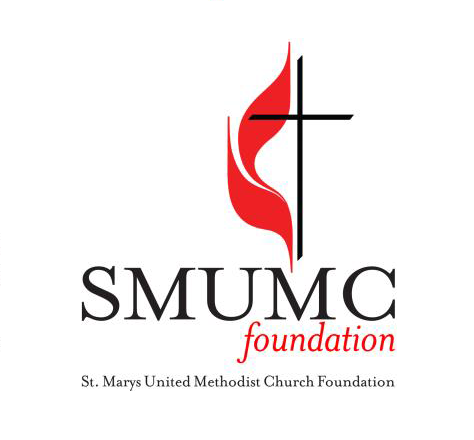 By GORDON JACKSON The Brunswick News

ST. MARYS — As director of STAR Foundation in Brunswick, Ellen Murphy understands the financial challenges facing charitable organizations.  She considers herself lucky that the St. Marys United Methodist Church Foundation has supported her nonprofit organization in the past. STAR helps people become self sufficient and achieve economic stability through computer literacy and job readiness training.  The Methodist Church Foundation named STAR one of 15 local charities to receive a combined total of $604,875 in grants. The nonprofit was awarded a $30,525 grant to help support its programs because of its positive impact in the community.

Murphy said the charities that qualify for the Foundation’s grants are closely scrutinized to ensure the money will be spent the way it is described in the grant application.  “It’s extremely important to anybody who gets it,” she said of the Foundation’s donations. “We have such a small budget, it’s vital to us. They understand operating expenses are vital to the survival of an organization.”  Leslie Hartman, Executive Director of Safe Harbor, is another recipient of a Foundation grant, this one for $100,000. Hartman said her organization is required to solicit another $100,000 in matching donations to qualify for the entire amount.  The money will be used to pay for the construction of a new residential home in Brunswick for abused, abandoned, neglected, runaway, homeless and at-risk children.  “Space is something we’re really excited about having,” she said. “We’re bursting at the seams.” Hartman expressed confidence her organization will reach that goal of raising the matching funds.  “It’s phenomenal,” she said. “Having their support makes it feel like the whole community is embracing this project.”

Other charities receiving Foundation grants are:
• American Red Cross, $30,000 to provide help to families who experience house fires in Camden, Charlton, Brantley and Glynn counties.
• Andrew College, $10,000 to support a joint chaplain position on campus.
• Children in Action Sports Club, $25,000 to provide support for after-school and summer programs in Brunswick.
• Coastal Coalition for Children, $48,500 for grant management and oversight services, as well as support for grandparents who are the primary caregivers for their grandchildren in Camden and Glynn counties.
• Communities of Coastal Georgia Foundation, $50,000 challenge grant for the organization to increase philanthropy and the quality of life in Camden, Glynn and McIntosh counties.
• Covenant Care Services, $15,000 for adoption placement and counseling services provided in Camden, Brantley, Charlton and Glynn counties.
• Georgia Grantmakers Alliance, $1,000 to support operational expenses.
• Glynn Community Crisis Center/Amity House, $35,000 to expand community outreach programs.
• Hospice of the Golden Isles, $80,800 to expand services and provide salary support for a chief medical officer and nurse practitioner.
• Hospice Satilla, $50,000 to support a part-time social worker and chaplain, as well as grief and educational support groups in Charlton and Brantley counties.
• Satilla Advocacy Services, $23,000 to partially support a prevention education coordinator’s salary in Charlton County.
• The Vashti Center for Children and Families, $60,300 for general operating support for its facility in Thomasville.
• Wesley Glen Ministries, $47,750 to create a partnership with a new human resources company to better serve people with intellectual disabilities in the region.

The St. Marys Methodist Church Foundation was created in 2001 after the death of local businessman Warren Bailey.  He left $60 million to the St. Marys Methodist Church, which at the time was the largest one-time donation ever given to a church. The church’s congregation voted to create the Foundation, using proceeds from the interest earned to help support charities in the region and beyond.

The Brunswick News - By Anna Hall

Looking around Lea King-Badyna’s office, it is easy to see she has a spark for creative thinking.  As Executive Director of Keep Golden Isles Beautiful, it’s her daily duty to find new, innovative ways to take the concept of recycling and inject it with a zeal that translates to community interests. 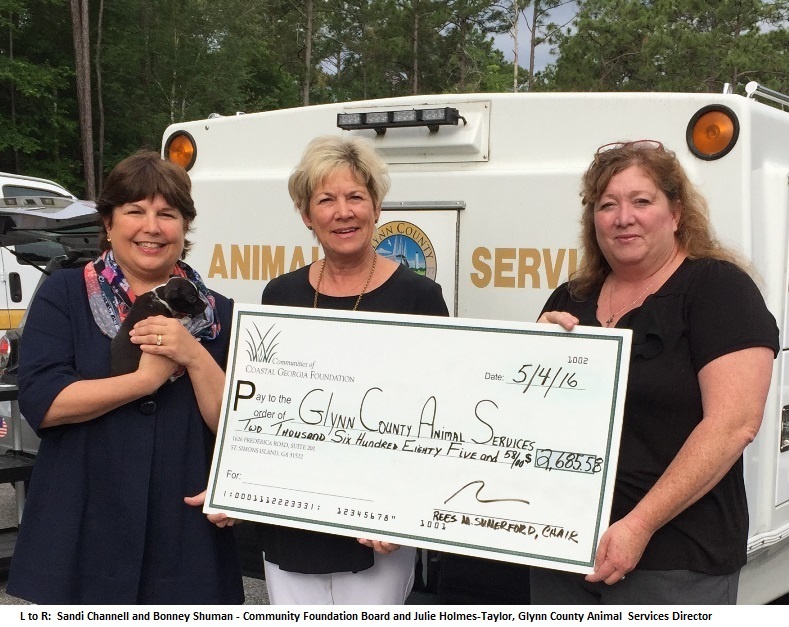 The Brunswick News - By Kathryn Downs

Glynn County Animal Control recently received a donation from the Communities of Coastal Georgia Foundation in the amount of $2,685.58. This donation was made possible by the generosity of the Raymond and Elizabeth Baumel and Abernathy Fund for Animal Welfare, an endowed fund of the Community Foundation. As stipulated by the endowment, these funds must be used for costs associated with the care, feeding, medical attention and sheltering of stray and unwanted dogs in Glynn County.